Samza is made up of three layers:

Samza provides out of the box support for all three layers.

These three pieces fit together to form Samza:

This architecture follows a similar pattern to Hadoop (which also uses YARN as execution layer, HDFS for storage, and MapReduce as processing API):

Before going in-depth on each of these three layers, it should be noted that Samza’s support is not limited to Kafka and YARN. Both Samza’s execution and streaming layer are pluggable, and allow developers to implement alternatives if they prefer.

Kafka is a distributed pub/sub and message queueing system that provides at-least once messaging guarantees (i.e. the system guarantees that no messages are lost, but in certain fault scenarios, a consumer might receive the same message more than once), and highly available partitions (i.e. a stream’s partitions continue to be available even if a machine goes down).

In Kafka, each stream is called a topic. Each topic is partitioned and replicated across multiple machines called brokers. When a producer sends a message to a topic, it provides a key, which is used to determine which partition the message should be sent to. The Kafka brokers receive and store the messages that the producer sends. Kafka consumers can then read from a topic by subscribing to messages on all partitions of a topic.

Kafka has some interesting properties:

YARN (Yet Another Resource Negotiator) is Hadoop’s next-generation cluster scheduler. It allows you to allocate a number of containers (processes) in a cluster of machines, and execute arbitrary commands on them.

When an application interacts with YARN, it looks something like this:

Samza uses YARN to manage deployment, fault tolerance, logging, resource isolation, security, and locality. A brief overview of YARN is below; see this page from Hortonworks for a much better overview.

YARN has three important pieces: a ResourceManager, a NodeManager, and an ApplicationMaster. In a YARN grid, every machine runs a NodeManager, which is responsible for launching processes on that machine. A ResourceManager talks to all of the NodeManagers to tell them what to run. Applications, in turn, talk to the ResourceManager when they wish to run something on the cluster. The third piece, the ApplicationMaster, is actually application-specific code that runs in the YARN cluster. It’s responsible for managing the application’s workload, asking for containers (usually UNIX processes), and handling notifications when one of its containers fails.

Samza provides a YARN ApplicationMaster and a YARN job runner out of the box. The integration between Samza and YARN is outlined in the following diagram (different colors indicate different host machines): 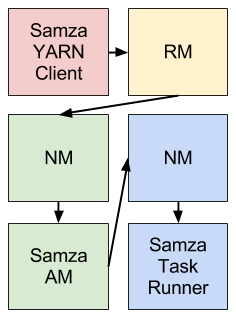 Samza uses YARN and Kafka to provide a framework for stage-wise stream processing and partitioning. Everything, put together, looks like this (different colors indicate different host machines): 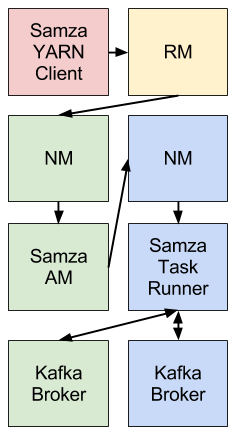 The Samza client uses YARN to run a Samza job: YARN starts and supervises one or more SamzaContainers, and your processing code (using the StreamTask API) runs inside those containers. The input and output for the Samza StreamTasks come from Kafka brokers that are (usually) co-located on the same machines as the YARN NMs.

Let’s take a look at a real example: suppose we want to count the number of page views. In SQL, you would write something like:

Although Samza doesn’t support SQL right now, the idea is the same. Two jobs are required to calculate this query: one to group messages by user ID, and the other to do the counting. 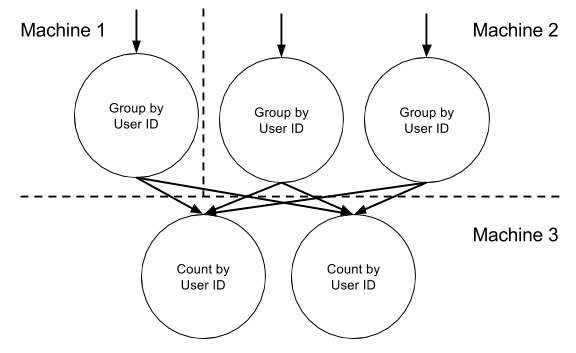 If you are familiar with Hadoop, you may recognize this as a Map/Reduce operation, where each record is associated with a particular key in the mappers, records with the same key are grouped together by the framework, and then counted in the reduce step. The difference between Hadoop and Samza is that Hadoop operates on a fixed input, whereas Samza works with unbounded streams of data.

Kafka takes the messages emitted by the first job and buffers them on disk, distributed across multiple machines. This helps make the system fault-tolerant: if one machine fails, no messages are lost, because they have been replicated to other machines. And if the second job goes slow or stops consuming messages for any reason, the first job is unaffected: the disk buffer can absorb the backlog of messages from the first job until the second job catches up again.

By partitioning topics, and by breaking a stream process down into jobs and parallel tasks that run on multiple machines, Samza scales to streams with very high message throughput. By using YARN and Kafka, Samza achieves fault-tolerance: if a process or machine fails, it is automatically restarted on another machine and continues processing messages from the point where it left off.